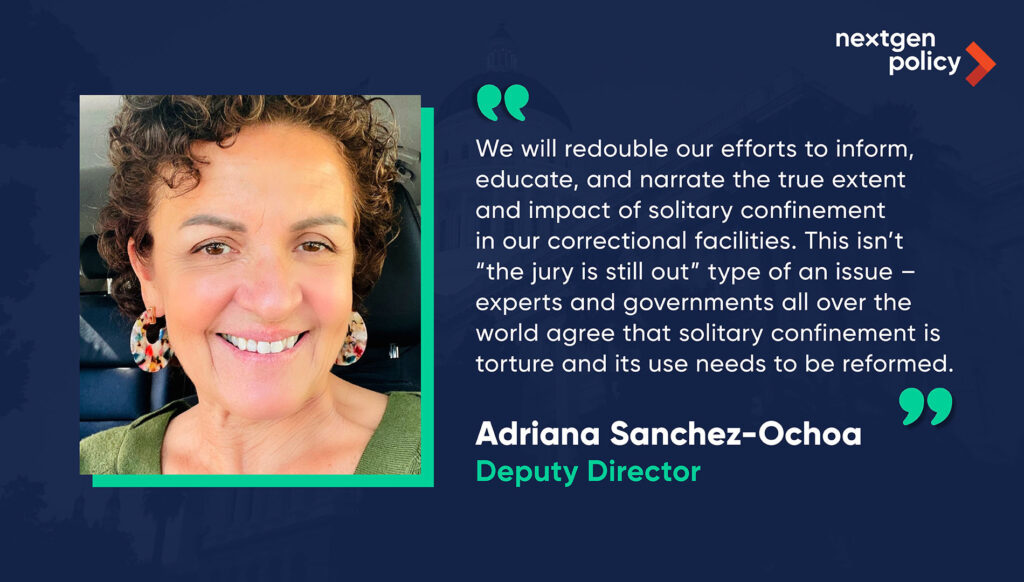 Advocates and supporters lamented the rejection of this historic bill, which would have ended the practice of placing individuals in solitary confinement for indefinite periods of time.

“We are extremely disappointed, but remain undeterred in our effort to prohibit the indiscriminate use of solitary confinement. California cannot continue to be a state that simply accepts torture in our correctional facilities. There is widespread consensus in the international and scientific communities that solitary confinement is inhumane, and we will continue to work with advocates, impacted persons, and lawmakers to change this intolerable status quo,” said Adriana Sanchez-Ochoa, Deputy Director of NextGen Policy.

AB 2632 would have banned solitary confinement entirely for specific populations, such as individuals with certain disabilities, people under 25 or over 60 years of age, and pregnant persons. It would have limited time spent in solitary confinement to 15 days or no more than 45 days total in any 180 period. The act would have also been the first of its kind to regulate this practice at private immigration detention facilities. A historic addition that would have reaffirmed California’s fight at the vanguard of bolstering human rights issues throughout the state and across the nation.

“We will redouble our efforts to inform, educate, and narrate the true extent and impact of solitary confinement in our correctional facilities. This isn’t “the jury is still out” type of an issue – experts and governments all over the world agree that solitary confinement is torture and its use needs to be reformed”, added Sanchez-Ochoa.

AB 2632 enjoyed widespread support among advocates, impacted persons, and several major news publications across the country. California now finds itself out of step with the international community, and states like New York and Colorado, all of which have passed strong measures to do away with this dangerous punishment method – a relic of a bygone era.

The mission of NextGen Policy is to fight for progressive policy change to address environmental, social, racial, gender, and economic inequities in California through justice-centered legislative advocacy, grassroots partnerships, and democratic civic engagement.