Striving to ensure that all women in California have equitable rights by advancing policies that fight for social, racial, economic and gender justice, including a person’s right to bodily autonomy.

“Now, more than ever, California must provide a safe haven for women and continue to set an example for the country on how to put forward policies that advance, not regress, women’s rights.”

And that’s why we respectfully recognize “women” as an inclusive term that encompasses all self-identifying individuals as such, with recognition to the non-binary and transgender experience. 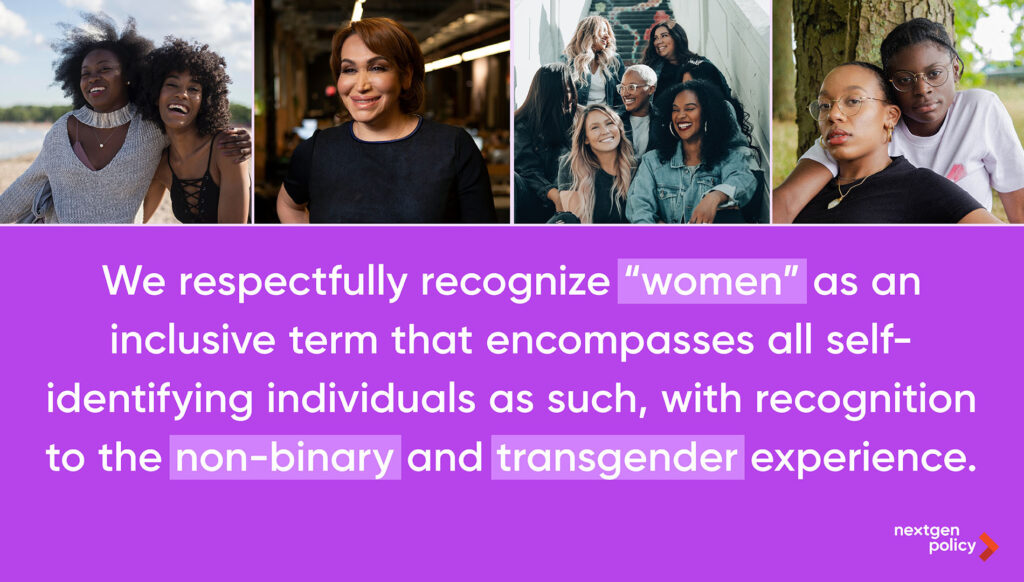 NextGen California was a proud supporter of SB 1162 (Limon), the Pay Transparency for Pay Equity Act, which was signed into law in 2022 and combats gender and race-based pay disparities by providing more information about salary ranges on public job postings and expanding existing pay data reporting requirements, especially for contract workers. The law will help to gather the data necessary to better understand pay gaps in our state and ensure California can lead on pay transparency and pay equity.

NextGen California was a proud supporter of AB 1455 (Wicks), which was signed into law in 2021 and extended the statute of limitations for victims who were sexually assaulted by law enforcement officers who were on duty, in uniform, or armed when the alleged crime occurred. Reported numbers of sexual assault fail to capture the actual number of incidents as the process of reporting sexual assault by a law enforcement officer can be harrowing, especially when victims feel intimidated by an attacker in a position of power or that their allegations will not be viewed as legitimate. This is an extremely under-reported epidemic that disproportionately impacts low-income women of color.

NextGen California was a proud supporter of SB 352 (Eggman), which was signed into law in 2021 and established sexual harassment as a stand-alone crime in California’s incorporation of the Uniform Code of Military Justice, holds such perpetrators of sexual harassment criminally liable, and makes sex crime data committed by military personnel publicly available. SB 352 will help reduce this type of sexual abuse that leads to other serious sexual offenses in the California Military Department. This law was a model for the nation as well. Shortly after SB 352 was signed into law by Governor Newsom, President Biden signed an Executive Order designating sexual harassment a stand-alone crime under the United States’ military’s judicial code.

This November, the right for individuals to make their own medical choices is on the ballot in California. Proposition 1 would enshrine the right to both abortion and contraception in our state constiution, ensuring that California is a safe haven for access to reproductive care.

ACLU: Six Ways You Can Join the Fight for Abortion Rights

ACLU: Six Ways You Can Join the Fight for Abortion Rights

By requiring CA employers to collect more pay data, we can work to close the gap for women & people of color.#SB1162 does more than expand pay transparency- it further dismantles patriarchal systems that perpetuate pay inequity.

With Governor @GavinNewsom’s signature on @SenSusanEggman’s #SB352, California becomes the first state in the nation to make it clear that sexual harassment will not be tolerated and is punishable within our military ranks. https://t.co/1u3vTnxDP3

— Office of the Governor of California (@CAgovernor) September 17, 2021

Her Senate Constitutional Amendment 10 (#SCA10) – which seeks to protect a woman’s right to make her own decisions about her own healthcare – creates a more inclusive & just CA! Thank you, @SenToniAtkins, for your leadership & commitment to making CA equitable for all. (2/2)